For providers like Riverview, recent changes in the U.S. healthcare system have placed more emphasis on improving the quality of care and increasing patient satisfaction. "In this era of healthcare reform, it is even more essential for providers to have a systematic method to improve the way care is delivered," says Christopher Spranger, director of Lean Six Sigma and Quality Improvement at Riverview Hospital Association. "We have had a Lean Six Sigma program in place for four years, and we are continuously working on ways to make our hospital safer and more efficient." To keep pace with these changes, including modifications in how Medicare payments are allocated to healthcare providers, Riverview relies on Lean Six Sigma processes and Minitab Statistical Software to make data-driven improvements to patient satisfaction and the quality of care.

Under what is known as Hospital Inpatient Value-Based Purchasing (VBP), a portion of the Medicare payments hospitals receive are tied directly to patient satisfaction metrics and the quality of care, rather than entirely on the volume of Medicare patients treated. A new rule from the Centers for Medicare and Medicaid Services (CMS) grants Medicare incentive payments to hospitals that are meeting high quality of care standards, or have shown sufficient improvements. Hospitals that do not meet these standards are subject to a reduction in Medicare payments. "Nearly all hospitals treat a sufficiently large percentage of Medicare patients," says Spranger, "so this rule presents a significant challenge with substantial financial implications for us—and for many other hospitals." 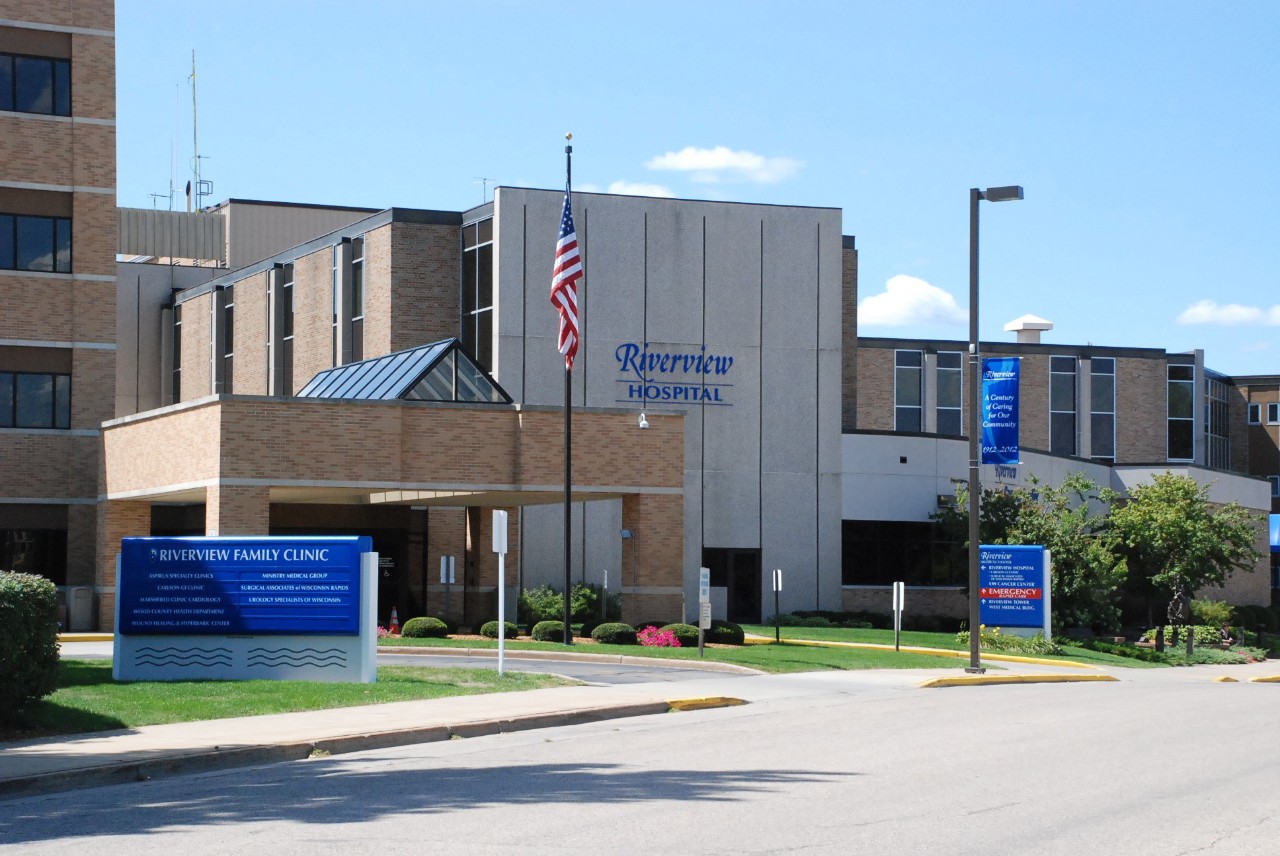 Incentive payments are determined by how well hospitals score on two point-based domains. One domain takes into account the clinical process of care, where the hospital is judged on its performance in meeting twelve predefined clinical measures. The second domain is based upon the overall patient experience and measured through a survey called the Hospital Consumer Assessment of Healthcare Providers and Systems (HCAHPS). HCAHPS scores depend on the percentage of positive responses received for each question within each specific "dimension," or category. Dimensions include communication with doctors and nurses, clarity of discharge information, overall hospital rating and more.

When Spranger and the Lean Six Sigma team at Riverview discovered that the hospital’s overall HCAHPS survey scores were lower than desired for the discharge information dimension, they set out to improve scores with Lean Six Sigma techniques and data analysis.

The Lean Six Sigma team’s goal was to increase the percentage of "yes" responses for the following yes/no HCAHPS survey question: "During this hospital stay, did doctors, nurses, or other hospital staff talk to you about whether you would have the help you needed when you left the hospital?" To start, the team assessed their baseline performance by plotting outcomes from the previous 24 months with a Minitab control chart. A control chart plots data sequentially, making it easy to see how a process varies over time—and whether that variation is unusual or not. The chart revealed a stable process and a current average positive monthly response rate of 85 percent. The goal was to improve positive monthly responses and exceed the preset benchmark of 91 percent. 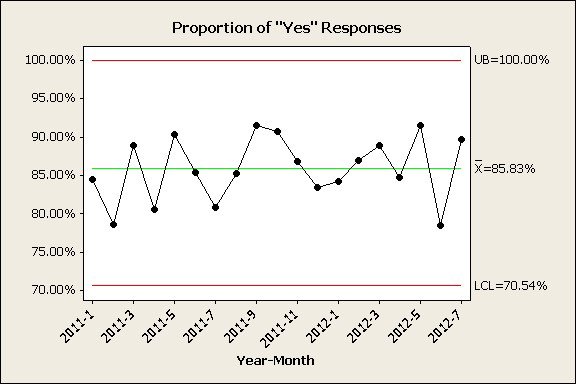 To determine underlying factors that could be causing low scores, Spranger and the team chose to analyze data the hospital already had on-hand about the patient, which was collected as part of the HCAHPS survey. They had access to the responder’s age, gender, length of stay, primary language, education level, hospital unit visited and more. With Minitab charts, histograms and plots, they were able to explore the variables and responses graphically, making it easy to see patterns and trends in the data.

The team analyzed the variables further, and used the Minitab Assistant—a menu-based tool that guides users step-by-step through their statistical analysis. They followed interactive decision trees to determine which analysis to use, and selected Analysis of Variance (ANOVA) to compare sample means and to look for significant differences within variables that could be impacting the HCAHPS survey question. 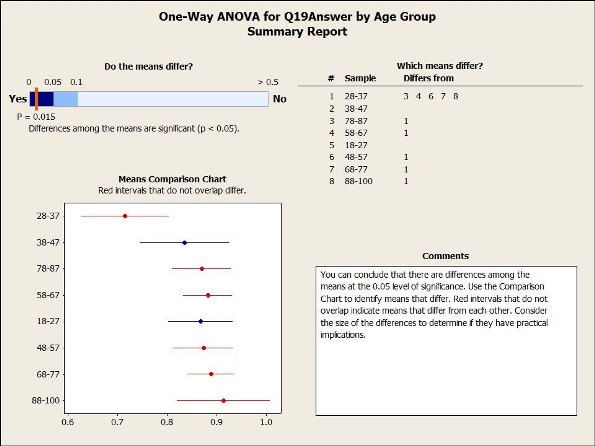 The Minitab Assistant Menu made it easy for the team to choose the correct analysis for identifying specific patient groups with low survey scores. With the ANOVA above, the team saw statistically significant differences among the mean responses by age group, which allowed them to target this audience in their improvement efforts.

The Riverview team began this project with a preset assumption that differences in the education level or the primary language of the respondent might offer insight into the low scores, but their analyses of these variables revealed no statistical significance. However, analysis of other variables uncovered statistically significant differences within respondent age groups and the hospital unit visited. "Analyzing the data in Minitab helped us to identify specific patient groups who were typically scoring lower, and then direct process improvement efforts to those patient populations," says Spranger. "We were able to take a large problem and drill it down to a very specific patient population."

The Riverview Lean Six Sigma team was able to narrow the project scope and use the insights they gathered to improve patient satisfaction for groups identified as scoring the lowest. "Historically, health organizations try to increase patient satisfaction through staff training and other large-scale solutions," says Spranger. "Now, with a data-driven approach, we are able to better target improvements." The improvements for this project targeted low-scoring patient groups from specific age ranges, as well as patients who stayed in specific hospital units.

The team also used the improvement effort to solve key problems identified in the current process for handling patient discharges, which included timing of education, ensuring the involvement of a family caregiver, and clarifying outcomes with the patient. They redesigned the discharge education process into three phases to address previous issues with timing, collaborated with primary care physician clinics to ensure consistency, created a process to ensure that a primary family caregiver was identified to engage in care management after discharge, and clarified terminology in discharge documentation that was considered vague.

After implementing these improvement strategies, the team compared the current proportion of "yes" responses to responses before the project began. They achieved an impressive gain in the proportion of "yes" responses and met their goal to surpass the 91 percent benchmark for average positive monthly responses. Currently, Spranger and his team are leveraging the other lessons they learned throughout this project and are forming additional improvement teams to analyze and improve other HCAHPS dimensions. "Our ultimate goal is to improve the experience for our patients," Spranger says. "Through efforts like these, the Lean Six Sigma team at Riverview continues to fulfill our mission."