OneSteel manufactures and distributes more than 40,000 products to some 30,000 customers in the construction, manufacturing, housing, mining and agricultural industries. At facilities throughout Australia, the company makes products ranging from thick beams to thin steel wires. OneSteel discovered that one of its facilities was producing rods with a great deal of variation in the amount of "scale," iron oxides that form when the surface of hot steel reacts with oxygen in the air during processing. Scale must be removed before subsequent processing to prevent wear on expensive equipment, and to avoid defects in the final product. Some amount of scale is inevitable, but excess scale results in a significant yield loss. OneSteel assigned a team to reduce the scale on rods to an acceptable level. The team members trusted Minitab Statistical Software to analyse their data and demonstrate the success of their project.

OneSteel’s raw metal travels from one facility to another as it is refined and processed into a final product. To produce a wire strand, the company’s Laverton Rod Mill rolls red hot raw steel into a thin rod, which is then processed further. At the Geelong Wire Mill, these rods are heated to a much lower temperature, then cold-drawn through dies to create wire strands with specific diameters and mechanical properties. 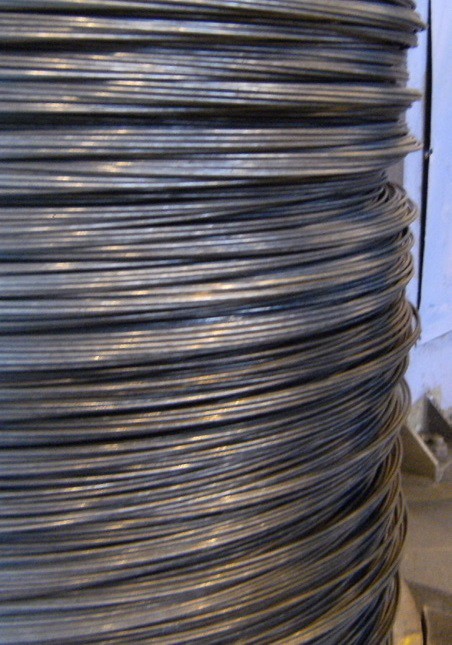 When the amount of "mill scale" on steel rod from OneSteel’s Laverton Rod Mill began affecting yield and profitability at the company’s wire mill, the company used Six Sigma and the power of Minitab Statistical Software to find solutions—and demonstrate their success.

To make a rod at Laverton, the steel is heated to temperatures of at least 1038° C and rolled. The rod then travels through water boxes, where it is cooled by a surface application of water as it travels through the mill. Next, the rod is routed to a laying head, where it is formed into a pattern of rings. These rings are placed on a moving conveyor, where they are cooled further then accumulated into coils.

High-temperature processing at the rod mill causes iron oxides, called "mill scale," to form on the rod’s surface. Scale levels vary depending on the type of rolling mill used, the temperature of the steel, and how long it remains heated. The abrasive nature of the fine scale dust particles seriously reduces the life of the drawing die and can result in an inferior product. Therefore, to successfully produce steel wire from the rod, the scale must be removed first. Geelong Wire Mill uses a mechanical process called reverse bend descaling, in which rods pass over a series of sheaves. The bending causes the brittle mill scale to loosen and fall away without harming the flexible steel, but the level of scale on the Laverton rods was often well above the desired level for mechanical descaling, and the result was decreased yield. Additional costs of excess scale include the expense of cleaning up and disposing of it, costs associated with running and maintaining the scale extraction system, and the potential costs of lower run rates, shorter die life, increased lubricant usage, and lower product quality. Considering that in 2008 the Geelong Wire Mill spent $815,000 for housekeeping, lubricant, and dies, reducing the amount of scale on incoming rods had potential to create enormous savings for OneSteel.

Six Sigma Black Belt Brett Perrin and process owner Shanti Arangala, with the support of their champion, Brian O’Connell, began their project in August 2008. Their team comprised members from both the rod and wire mills, including technical managers, process engineers, quality professionals, a metallurgist, and equipment operators.

Using the DMAIC (Define, Measure, Analyse, Improve, and Control) methodology, the project team studied the entire wire-making process, and defined a defective rod as one with descalability lower than 95%. They then proceeded to sample the rods coming into the Geelong Wire Mill from Laverton.

When OneSteel’s project team measured scale on rods from the Laverton mill and analyzed their data in Minitab, they found 62% of the samples they tested had unacceptably high scale levels.

The team measured scale weight as a proportion of the total product (steel rod coils) in kg/Tonne. They found that 62% of the samples they tested exceeded 7 kgs of scale per tonne, with significant variation of up to 3 kg per tonne. This results in a significant yield loss, because a variation of just 1 kg per tonne is worth $75,000 in yield. At the Geelong plant, the estimated loss to excess scale was estimated to be around $220,000 per year.

Throughout the project, team members turned to Minitab both to analyse their data and to communicate the significance of their findings. For example, they used Minitab’s 2-sample t-test to prove the difference in scale weights between grades of steel rods, but also used a box plot to display the information visually. 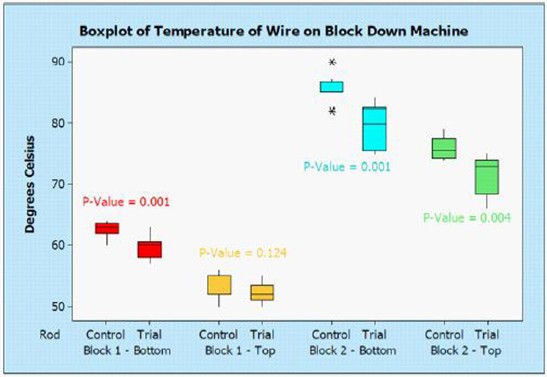 A boxplot of machinery temperature data collected under control and trial conditions vividly displays the lower temperatures obtained in the trial runs.

They used Minitab’s powerful regression analysis to reveal the relationship between laying head temperature and scale weight, and they used the software’s scatterplot to display that relationship visually.

The team also applied Minitab’s Probability Density Function to actual sampling data and compared it to a desired result to determine the potential savings that could accrue as a result of reduced variation and reduced scale weights. 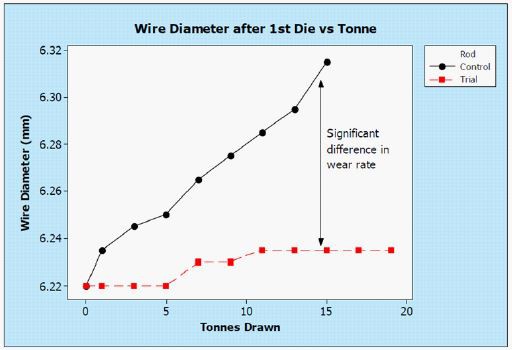 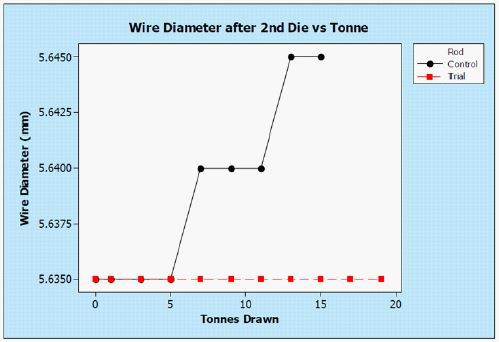 Minitab’s powerful graphics made it easy for everyone in the project to see the difference in die wear between the trial run (red) and the control run (black).

Pareto analysis determined which rod grades were causing delays on the wire drawing machines. "Not only does Minitab do this very quickly with limited data manipulation, but it also has very clear graphs that are an effective communication tool in presentations," notes Perrin.

Changing the characteristics of the feed used to create the steel rods at the Laverton Rod Mill was not an option, so the team looked for other ways to reduce the percentage of rod scale and increase the wire mill’s yield. They ran experiments to test factors including the cooling processes used at the rod mill, the descaling and drawing practices used at the wire mill, and operational parameters at both mills.

First, they ran a test to evaluate the effects of cooling conveyer parameters on the amount of scale on a rod. They also measured the temperatures of the wire drawing block and the laying head at the rod mill. Minitab analysis revealed a significant difference when the reform temperature on the cooling conveyer was reduced by 30%.

Next, they tested the effects of drawing methods on yield. For both the control run and the test run, the team set up production lines with new dies, new lubricant for each die, new brushes in the descaler unit, and kept the run speed consistent. The run using their trial parameters resulted in lower temperatures, cleaner product, lower die wear, and less visible scale. A strength test showed no statistical difference between the quality of the trial product and the control product.

They measured die wear on the wire drawing machine and found the new parameters also dramatically affected the life of the drawing dies. In one test, the diameter of wire from a die was 6.22 mm at the start of the run. After running 15 tonnes of wire using the control rod, the die had reached a diameter of nearly 6.32 mm. Die wear for the line that used the trial rod was significantly less—after 15 tonnes, the diameter was below 6.24 mm. 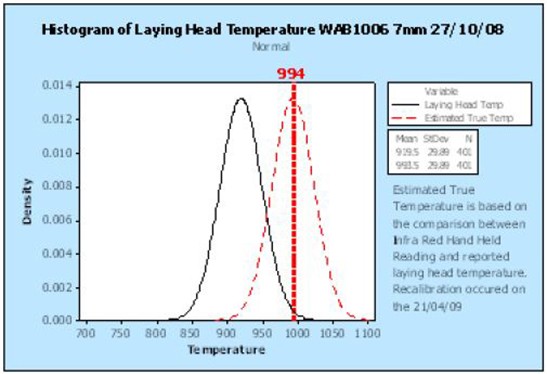 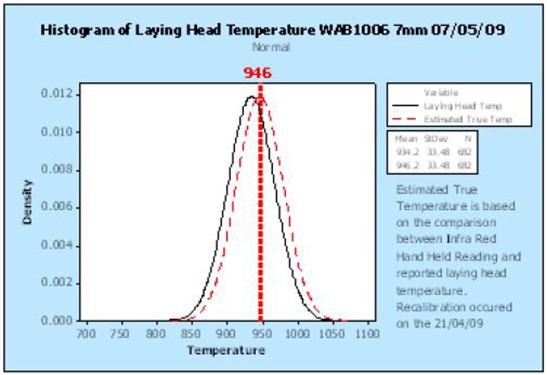 Analyses of data collected before and after reveal the impact of improvements to the calibration procedure for the laying head at the Laverton Rod Mill. The more accurate "true" temperature estimates help the mill ensure that the levels of scale on its rods are within acceptable boundaries.

After implementing various improvements, the team used Minitab to analyse both scale weight and laying head temperature for a recent rolling of 7 mm wire. Minitab’s analysis confirmed that the rod mill is capable of producing rod suitable for mechanical descaling, with a much lower yield loss to scale than in the past.

Using Minitab, the team created control charts that clearly showed the effect of trials undertaken at the plant. This was an effective way of communicating the outcome of trials to the process owners.

The team’s efforts have improved the cooling process at the Laverton Rod Mill. The operators now have better control of laying head temperature, and Minitab analysis has confirmed that the improved cooling process has significantly reduced rod scale weight.

The Minitab histograms on the right show how improving the rod mill’s calibration procedure has brought the estimated "true" temperature and that reported by the laying head closer. This has resulted in a reduction in real laying temperatures compared to previous rollings, and this lower laying temperature is the main driver in reducing the amount of yield loss as mill scale for rod mill customers.

The new rod from Laverton is a much cleaner, visibly superior product for the Geelong Wire Mill. As a result of the reduced amount of scale and increased yield, OneSteel anticipates saving approximately $235,000 annually, plus another $40,000 savings in labour and consumables. The reduction in scale also has additional downstream processing benefits.

With the improvements confirmed, OneSteel’s project team has entered the Control phase of their DMAIC process. They’re using Minitab’s control charts to lock in the changes they’ve made to procedures and maintenance activities, making it easy to sustain this improvement and ensure that the savings carry forward in future years. Meanwhile, OneSteel’s Six Sigma office is finding new ways to apply the power of quality improvement—and Minitab Statistical Software—to boost efficiency and profitability in every corner of their global operations.