Companies usually adopt new administrative software with the hope of reducing the time and money it takes to complete a business process. But what if a change in systems has the opposite effect?

That’s what happened to RightSource, the mail-order division of Humana Pharmacy Solutions. They implemented a new Pharmacy Management System (PMS), only to find that work slowed and orders began piling up—a turn of events that was bad for their business, and for the patients and doctors they served.

With customer complaints quickly accumulating, RightSource had to find out what went wrong and fix it. Thanks to Minitab and Lean Six Sigma, they were able to improve the process and streamline their ability to fill prescriptions.

RightSource is a state-of-the-art mail order pharmacy and the fifth largest pharmacy benefits provider in the United States. Like their parent company Humana, they are always looking for ways to fulfill their mission of lifelong well-being. This commitment drove their decision to migrate to a new operating platform that offered valuable customer-centric tools and advanced workflow processes. 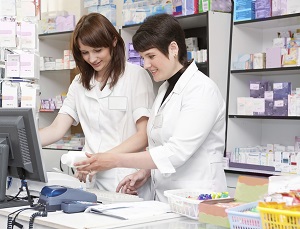 Analyzing their data with Minitab gave RightSource the insight they needed to improve their process for filling prescriptions.

But their decision seemed to backfire. Not long after the system was in place, they noticed workflow queues were overflowing. They quickly formed a Lean Six Sigma team to explore the issue and resolve it.

The team took a closer look at the process and found that employees were able to easily fill prescriptions moving through the “clean path”—the standard workflow when no additional steps were needed. The delays were occurring in the “exceptions path,” a more labor-intensive process necessary when a prescription required an intervention with the provider, member, or a third-party payer.

Now they had to find out why.

To investigate the “exceptions path” further, the team reviewed the Work in Progress (WIP) report for prescriptions submitted after the new system was implemented. Using Minitab’s Pareto chart, they determined that almost 43% of WIP inventory that had been sitting for 10 or more days was in the provider outreach queue. 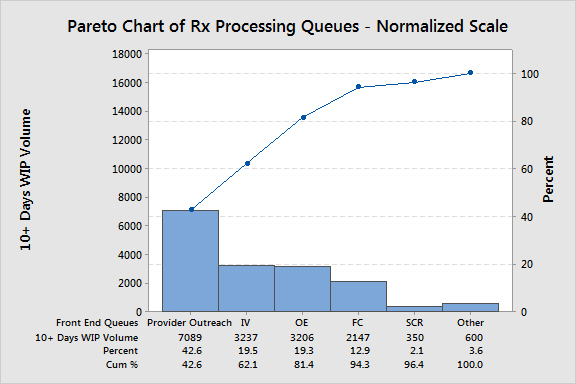 Minitab’s Pareto chart helped RightSource determine that most of the prescriptions still waiting to be processed after 10 or more days were delayed in the provider outreach queue.

They also discovered that many of the members calling about prescription delays had orders in the provider outreach queue. Further analysis showed that provider outreach productivity had dropped 39% after the new system was implemented.

It appeared as if transitioning to the new PMS had slowed employees’ ability to process orders that required outreach to the provider, and that these delays were causing out-of-tolerance metrics for WIP inventory and turnaround time (TAT).

Armed with this knowledge, the team established three goals:

Finally, the team used a one-way ANOVA and Tukey pairwise comparisons to test for differences in the mean productivity of top, average, and low performers. They found statistically significant differences between the groups, and then discovered that performance correlated with level of experience—the more experience employees had, the more productive they were. Regrouping employees based on level of experience and graphically representing this difference with a Minitab boxplot highlighted the possibility that a lack of knowledge might be contributing to the prescription processing delays. 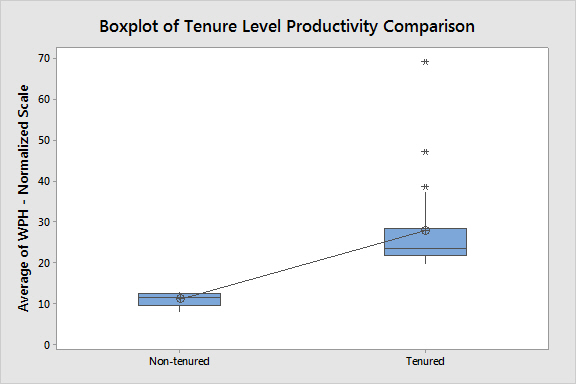 A Minitab boxplot illustrated that less experienced employees were also less productive, suggesting a gap in knowledge might be related to the delays observed after RightSource adopted the new PMS.

Once they understood why prescriptions were stalling in the provider outreach queue, the team brainstormed 14 potential solutions. After using an impact matrix to identify the cost, benefits, and effort of each one, they narrowed it down to five solutions:

Given what they had learned from the data analysis, the team was confident that implementing these final solutions would improve the inefficiencies they were experiencing.

For example, the problem underlying the NVA process proved to be an IT-related issue, and when the team removed NVA steps in a test environment, Minitab’s 2-sample t test confirmed the changes were statistically significant. And using Minitab’s 2-proportion test, the team also confirmed that provider response delays decreased, and that retraining associates improved their ability to correctly enter addresses and transfer reasons.

When Right Source’s Lean Six Sigma team implemented these solutions, the results exceeded their expectations. The company reduced 10 or more day WIP inventory by more than 40%, raised productivity by 30%, and increased provider response by 2%.

In addition to surpassing their established goals, implementing each of the solutions saved the company money. In particular, removing the NVA steps cut labor costs by a whopping 32%.

They also created operational dashboards that tracked key performance indicators, such as daily WIP inventory, and identified solution owners to monitor the process and ensure changes remained in control. The organization now analyzes and reviews productivity data in monthly governance meetings, and has contingency plans in place to respond to any variations in the new process.

RightSource’s data-driven response quickly restored a process that had fallen out-of-control, and Minitab helped them ensure the improvements were effective and long-lasting. Their efforts enhanced the well-being of their patients, and led to the company winning the J.D. Power Award for Highest in Customer Satisfaction with Mail-Order Pharmacies—a prescription for success they were happy to fill.