Every day, thousands of people visit their financial entity to withdraw extra cash for daily expenses. These individual transactions may be small, but when hundreds or thousands of those transactions are made at a branch every day, the total amount of cash dispensed can be a very high sum. But each branch’s daily operations are limited by a fixed cash flow which must be set without prior knowledge of what each customer will require, which creates a challenge for financial entities. Customers simply expect that the bank will have adequate cash on hand, so how can the bank confidently ensure it has enough funds to accommodate customer transactions without keeping too much in reserve?

A quality improvement project team led by Jean Carlos Zamora and Francisco Aguilar at Grupo Mutual, a financial entity in Costa Rica, focused on the amount of cash kept in the vaults to support transactions at 55 branches. Using Minitab Statistical Software, the team examined the cash flow at each branch and determined the optimal cash amount to store in each vault. The team applied data analysis and Lean Six Sigma (LSS) methods to increase cash usage, decrease costs, and free Grupo Mutual to reinvest funds that increased revenue by $1.1 million—without affecting the quality of its client services.

Grupo Mutual’s 55 branches generate a constant cash flow that supports the entity’s operations, but additional funds are sometimes needed when a branch’s client base withdraws more than they deposit. To avoid having insufficient funds, each branch keeps additional cash in a vault to ensure it can provide essential services. But despite this precaution, without any research to understand daily needs, some branch vaults often ran out of cash anyway, while others had significant reserves that went unused. Not having the necessary cash on hand at each bank created high costs for the company and presented customers with three undesirable options: receive the funds from the bank as an electronic transfer, wait 1-3 days for consignment, or travel to the main branch to make their withdrawal.

At Grupo Mutual, a project team identified the optimal amount of currency to store at each of the bank’s 55 branches, and adjusted the cash flow in order to avoid both a negative cash flow and idle funds. The team used Lean Six Sigma methods and Minitab Statistical Software to increase revenue by $1.1 million, increase cash usage by 40%, and reduce costs by 60%.

Keeping the ideal amount of cash in each branch vault would reduce costs and maintain customer satisfaction. In order to optimize the cash flow process between branches, the team needed to make adjustments that would avoid idle funds.

The team applied the five-phase DMAIC (Define, Measure, Analyze, Improve, and Control) method to their project, and they began by defining the project goal—creating an efficient process that transferred cash from unproductive bank vaults to the branches where they were needed most.

During the Measure phase, the team gathered cash-flow data from 55 branches over a two-year period, including inflow, outflow, balance, amount of cash in the vault, filling of ATM machines, and cash remittances for both Costa Rican colones and U.S. dollars. The data was segmented by morning and afternoon hours, number of cash transactions, and transaction amount. “Managing the databases and analyzing about 2,000 data points from each of the 55 branches was our biggest challenge,” says Jean-Carlos Zamora Mora, project leader and improvement specialist at Grupo Mutual. “Minitab played a very important part in addressing this issue. It reduced the analysis time by helping us identify where to focus our efforts to improve our process.”

The project’s Analyze phase began with an analysis of variance (ANOVA) for both colones and dollars to explore how the banks’ cash flow varied per month. The ANOVA revealed significant differences, so they next used Minitab’s Tukey comparisons to identify which months were different from one another and group similar months together to streamline the analysis. 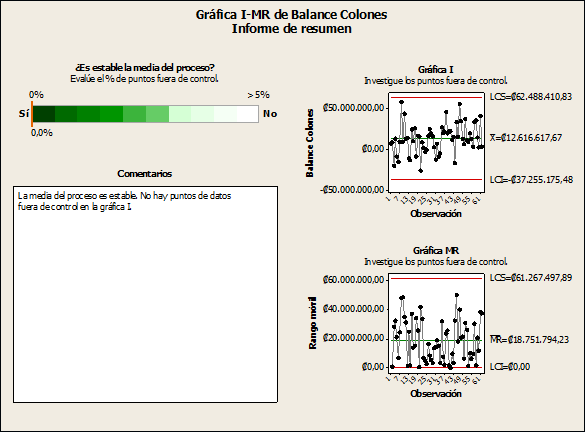 Control charts were used to graph the data over time and assess whether or not the process was stable, in preparation for conducting capability analysis.

The team also used control charts to verify that the cash flow for each group was stable, meeting the data requirements for capability analysis. To help the team choose the right control chart and automatically create comprehensive summaries of the results, the team used the Minitab Assistant.

The team then used Minitab to perform a capability analysis of each group’s current cash flow. This analysis determined whether the inputs and outputs generated by customers were proportionate to the services provided, and established what percentage of cash was being used at each branch. 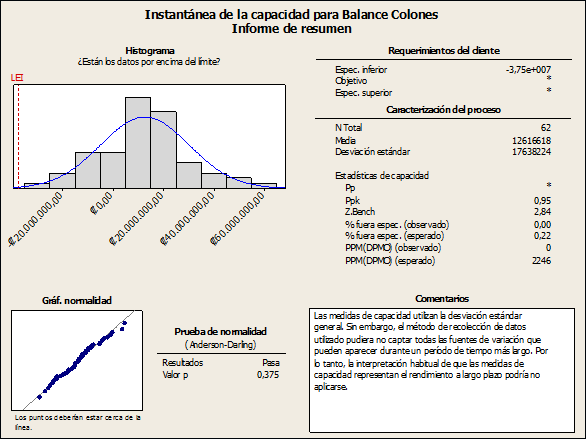 Each group demonstrated an excess cash flow: in total, the vaults contained more than the necessary funds each branch needed to operate effectively, but excessive circulation of the money caused some banks to overdraw their vaults while others stored cash that was not utilized.

“We found a positive cash balance at 95% of the branches,” says Zamora Mora. “The analysis showed the cash on hand to meet customer needs exceeded the requirements by over 200%, so we suddenly had lots of money to invest.”

The capability analysis for each group revealed opportunity for significant savings and gave the team the confidence to move forward with the Improve phase: implementing real-time control charts that enabled management to view each branch’s cash balance at any point during the day. The charts also included cash limits that were determined by cash flow data generated by customers’ inputs and outputs, as well as the amount of idle money and utilization rate. Managers could quickly identify which branches had excess cash and move it to the branches where additional funds were needed, maximizing the utility of the cash generated without disrupting customer service.

A successful pilot-test of the real-time control charts encouraged the team to train appropriate employees to use the new tool. Those involved in transferring funds could manage funds according to the status of each branch as seen in its control chart, and management could make more strategic decisions for a more efficient cash flow.

Like most quality projects, this effort encountered some resistance and unexpected challenges—but being able to answer objections with data played a key role in getting buy-in from stakeholders. “Throughout this project, we encountered questions and situations that could have jeopardized our team’s credibility and our likelihood of success,” recalls Zamora Mora. “But the accuracy and reliability of our data analysis with Minitab was overpowering.”

Changes implemented as a result of the project increased cash usage by 40% and reduced remittance costs by 60%. The new process also decreased insurance costs and reduced the risk associated with storing and transporting money. The project’s overall impact increased revenue by $1.1 million dollars and established a more balanced relationship between the company’s profitability and the needs of customers served by each branch.