Akron Children’s Hospital is serious about enhancing the patient experience, along with delivering quality healthcare in a timely, efficient manner. While the hospital formally established the Mark A. Watson Center for Operations Excellence in 2008, it has been performing quality improvement since its early beginnings 125 years ago. It’s no wonder the healthcare provider has consistently earned Best Children's Hospitals rankings in 7 of the 10 specialties evaluated annually by U.S. News & World Report —including cancer, diabetes and endocrinology, pulmonology, neonatology, neurology and neurosurgery, and orthopedics.

The hospital encourages employees across all skill levels and departments to become involved in quality improvement, offering several levels of Lean Six Sigma training. As part of its green belt training and certification, employees learn to use Lean Six Sigma by leading and completing long-term projects with the guidance of experienced black belts.

One such green belt project, which began at the hospital’s Mahoning Valley, Ohio campus, had a goal to decrease one particular safety event—unplanned extubations in the hospital’s neonatal intensive care unit (NICU). To complete this project, the hospital improvement team relied on Lean Six Sigma tactics and the data analysis tools in Minitab Statistical Software.

An intubation is a medical procedure in which a breathing tube is placed into a patient’s trachea. This tube connects the patient to a machine called a ventilator, which helps the patient breathe. The procedure is common for both pediatric patients and adults in intensive care, but is most common for premature newborn babies residing in a hospital’s NICU. Babies born prematurely often have undeveloped lungs, which cause breathing problems and the need for the assistance of a ventilator. 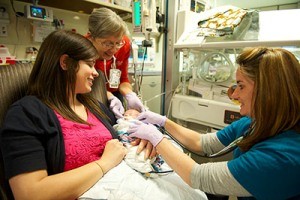 Akron Children’s Hospital relies on Minitab Statistical Software to analyze their Lean Six Sigma project data. The hospital used Minitab to verify improvements made to the intubation process in the NICU.

Although this medical procedure is commonly performed, it is not without risk, and can cause trauma to or introduce an infection into the patient’s airway. Unplanned removal of the breathing tube, which is also known as an unplanned extubation, is a likely occurrence that can cause harm. Unplanned extubations are the fourth most common adverse event in NICUs across the U.S.

“I knew this project was the perfect fit for me because as a respiratory therapist, I’ve been part of the frontline staff primarily responsible for intubating,” Powell says. “When you’re the one actually putting the tube into the patient, it just affects you more because you know the trauma that you could be causing to them.”

While there’s not a true benchmark rate that NICUs should strive to stay below regarding unplanned extubations, the Vermont Oxford Network—a research collaboration of nearly 1,000 global NICUs including Akron Children’s—considers 2 in 100 intubated patient days to be the upper limit of acceptable. Previous data collected on the rate of unplanned extubations at the Mahoning Valley NICU revealed a rate of 3 in 100 intubated days.

“Any unplanned extubation has the potential to cause harm to the patient and negatively impact overall patient satisfaction,” says Powell. “We wanted to improve our performance on this metric.”

The team began by using Lean Six Sigma tools to brainstorm reasons why unplanned extubations were occurring, as well as solutions for stopping them. “The fishbone diagram and cause maps were among the most helpful tools we used,” Powell says. “We looked at the highest impact solutions, as well as how easy they would be to implement, and prioritized solutions from there.

“This step helped us to organize and roll out our seven improvements into two phases,” she says.

Along with more frequent communication between nurses and respiratory therapists before, during, and after an intubation, as well as educational information distributed in meetings and via email, one improvement implemented was the “two to turn” rule. “Anytime an intubated patient is repositioned, one caregiver is turning the patient and another is holding the tube at the patient’s mouth,” Powell explains.

The team applied the improvements for several months, as collecting enough data to meet the required 100 intubated days for pre- and post-improvement comparison proved difficult for many reasons.

“There is a continuing trend in neonatal care to use devices such as masks and nasal prongs to connect the patient to the ventilator to help with breathing. When these devices are used, there is no need for a breathing tube, which reduces the number of intubated days and lengthened our post-improvement data collection period,” Powell says. “That, coupled with greater attention to our weaning protocol, which focused on shortening the time babies need ventilator support of their breathing, contributed to why we saw a reduced amount of intubated days.

“Of course, fewer intubated days was a good thing in this case, and supported the idea that our improvements were working,” adds Powell.

To verify their results statistically, the team ran a 2 proportions test in Minitab to see if their unplanned extubation rates decreased after improvements were put into place. 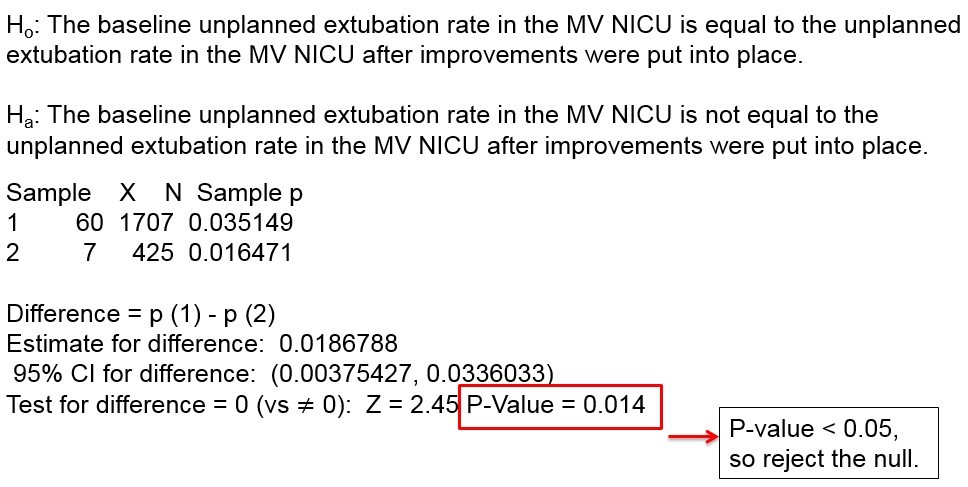 Hypothesis testing in Minitab makes it easy to determine if there is enough evidence in a sample of data to infer that a certain condition is true for an entire population.

The analysis showed the team that after improvements were implemented, the unplanned extubation rate had indeed decreased.

The team also used Minitab to perform process capability analysis both pre- and post-improvement. This tool provided another before-and-after comparison of unplanned extubation rates, and aided the project team in assessing whether the new process was capable and in statistical control.

“I have never taken a statistics course and have no background in this type of work,” Powell notes, “but Minitab, coupled with the instruction I received from the Center for Operations Excellence, made it easy for me to analyze and understand my data.”

Trauda Gilbert, deployment leader for the Center for Operations Excellence at Akron Children’s, echoes Powell. “To be able to use Minitab to visually demonstrate the before and after effect with a control chart, which you can then share with your team and champion is really valuable. Minitab also makes it easy for front-line staff to document that they have made a statistically significant difference. To be able to do that without having to interact with a biostatistician or one of the other very rarely found statistical resources in our organization, is very beneficial,” she notes.

“Healthcare quality is a little different than manufacturing because we can’t just run a DOE and tweak a process line,” says Gilbert. “Even though we’re different, Minitab still helps us out.”

“This project showed us that simple improvements can create real change,” says Powell. “The cultural change this project instilled in our team was exciting—the recognition that even they could make a difference is huge.”

Cost savings resulting from the reduction in supplies and staff time needed to care for unplanned extubations can be calculated, but the overall financial impacts are hard to quantify. “The larger costs of unplanned extubations—such as a longer NICU length of stay, ventilator-associated pneumonia, and other setbacks that the patient can experience from the event—can be difficult to tease out,” Powell says.

“Neonatal patients are some of our key customers here,” she continues. “Due to the fact that they were born early, they come back to our institution for care frequently, especially initially. Making sure they have a safe experience early is critical, because the results of good care at this stage can have exponential benefits for patients in the future.”

In addition to improving the patient experience, the project helped Powell obtain her Lean Six Sigma belt certification. “I did get my green belt as a result, and we’ve also rolled out selected improvements to the NICU at our Akron campus,” she says. “We’re in the process of collecting data there as well, so this project didn’t just stop in Mahoning Valley.”

Powell’s project is just one example of an estimated 300 documented projects that have been completed throughout the Akron Children’s organization. The total financial savings of the hospital’s operations excellence program is estimated to be more than $25 million since its official beginnings in 2008.

Reduce unplanned extubation rates in the NICU at the hospital’s Mahoning Valley campus.